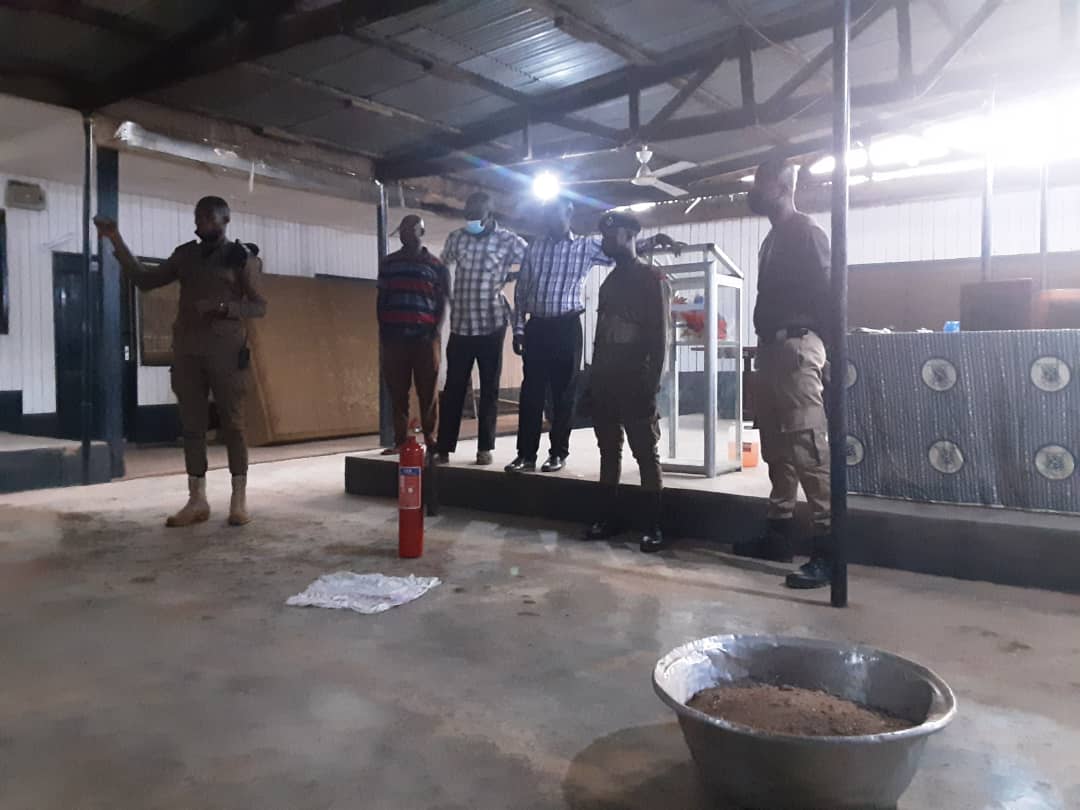 The staff of Dambai College of Education has been sensitised by personnel from Krachi East Municipal Fire Command of the Ghana National Fire Service. The sensitisation programme, which was organised on Wednesday, 9th February, 2022, commenced at 5:20 p.m. with an opening prayer from Elder Timothy Koki.

The Assistant Divisional Fire Officer, Mr. Victor Kudoadzi began his presentation by first thanking the College Management for inviting them to educate the staff on fire precautions. He explained that one of the core mandates of the GNFS is to educate the public on the role of the individual during fire outbreaks. Another is to organise volunteers at the community level during fire outbreaks. Mr. Kudoadzi also educated the staff on some functions of the individual which fall within the vision of the GNFS.

In his presentation, the Assistant Divisional Fire Officer of Krachi East outlined some causes of fires in the home. According to him, haphazard arrangement of things in rooms; old electrical wires; loading low voltage sockets with high voltage equipment; using inferior extension cords; engaging the services of unqualified electricians; overloading of sockets; expired/old sockets; cobwebs, and keeping inflammable materials or fuel in the room are the main causes of domestic fires.

Mr. Kodoadzi continued by educating the staff on some precautionary measures that can help to avert the outbreak of domestic fires. According to the Assistant Divisional Fire Officer:
Gas cylinders should be placed upright in vehicles after filling them;
Gas cylinders should also not be filled to the brim;
For control burning, both individuals and institutions should engage the services of personnel from the Ghana National Fire Service;
Fires on gas cylinders should be quenched with wet rags;
Gas should always be put off from the cylinder rather than the burner;
Phone calls should be avoided while the gas is on;
If possible, gas cylinders should be kept outside the room;
Doors to halls/rooms of institutional structures should be fixed in such a way that they could be opened outside.
The Assistant Divisional Fire Officer ended the presentation with two demonstration exercises: how to quench gas cylinder-related fires using wet rags and how to use fire extinguishers during fire outbreaks. He used the acronym ‘PASS’ which represents the words Pull, Activate Squeeze and Sweep, to explain to the staff on how to operate fire extinguishers during fire outbreaks. He further elucidated the serial numbers on gas cylinders. According to him, letters of the alphabet such as A, B, C and D as found on gas cylinders represent first, second, third and fourth quarters of the year respectively, and the 2-digit number which follows the alphabet on each cylinder represents the year in which the cylinder was manufactured.

In his closing remarks, the Head of Department for Science, Mr. Affram David Yentumi thanked the fire officers for extending their expertise to the DACE Community. Mr Affram, on behalf of College Management and the entire staff, also assured the fire officers of putting into practice, all the precautionary measures outlined by the Assistant Divisional Fire Officer in his presentation.